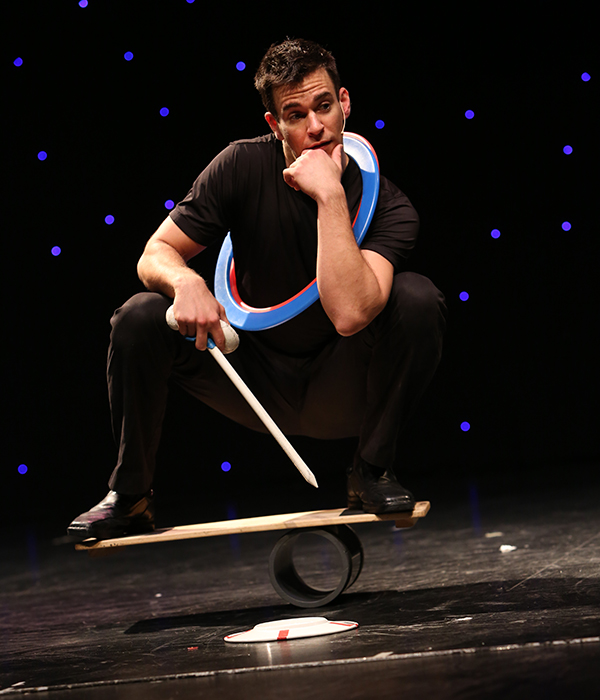 You may think family-friendly shows in Las Vegas are few and far between but it all depends on where you’re looking. And if you’re looking at The Linq you and the family are bound to enjoy an afternoon with Jeff Civillico, the Vegas-based entertainer who blends physical comedy, action-packed stunts and world-class juggling with audience interaction and tons of energy in this incredible production.

Thanks to his razor-sharp wit the show is a non-stop laugh fest. But when he’s not making you laugh he’s making you hold your breath as Jeff juggles everything from bowling balls to chainsaws to fire. He even balances a twelve-foot ladder on his chin and maneuvers a sky-high unicycle. And Jeff loves bringing the audience into his wild fun by pulling both kids and adults onstage to help create a hilarious and unique show every single day.

Jeff is one of the youngest headliners on the Strip but that doesn’t mean he lacks experience. In fact, Jeff’s show Jeff Civillico: Comedy in Action was voted one of Total Vegas Guide’s “Top Ten Things to Do in Las Vegas.” And that’s just what he’s accomplished in Las Vegas. The juggler and comedian has performed everywhere from Disney Resorts to the White House, as well as on television including the Travel Channel show, Vegas Strip Search.

And that’s just the beginning of his impressive resume. If you can’t tell in his daring show, Jeff has a passion for death-defying and wacky stunts. That’s evident in his record-breaking bungee jump, which included bungee jumping on his unicycle off a cliff in New Zealand. He also likes to go “joggling” – juggling while jogging. In fact, Jeff raised $5,000+ as a team member of “Athletes for Special Kids” by joggling all 26.2 miles of the Disney Marathon!

Aside from his entertainment talents, Jeff is very into his charity work. He is the Founder and President of Win-Win Entertainment, a non-profit which pairs performers willing to donate their time and talent with charity organizations. He also spends his free time on the membership committee of the Young Non-Profit Professionals Network of Southern Nevada and is an avid member of the National Speakers Association of Las Vegas.

You can watch the incredible Jeff Civillico every Monday, Wednesday, Thursday, Saturday, and Sunday at 2 p.m. at The Linq Theater inside the brand-new Quad Resort & Casino with discounted tickets right here on Best of Vegas.

BestofVegas offers special deals on our show tickets! Check them out :-)